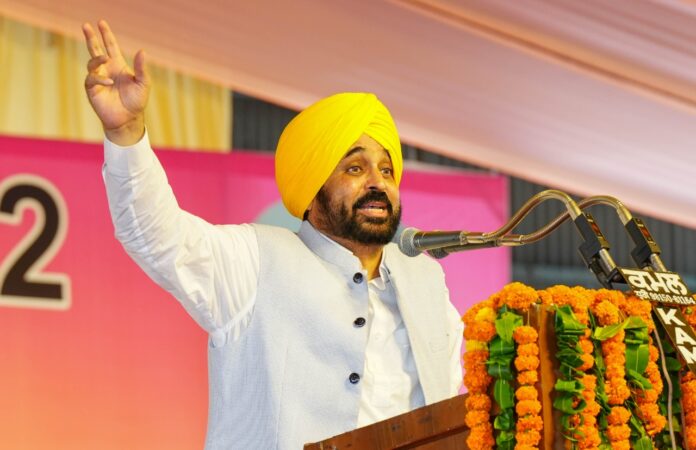 Slamming the opposition parties as ‘chronic liars’, the Punjab Chief Minister Bhagwant Mann on Saturday said that instead of working for the well being of people these leaders are habitual of finding faults in every pro-people initiative of the state government.

The Chief Minister announced that the state government will leave no stone unturned for making Punjab free from corruption, drugs, unemployment and other maladies. He solicited fulsome support and cooperation of people for this noble cause adding that this work cannot be accomplished without their support. Bhagwant Mann said that the entire government mechanism is with the people of the state to get rid of these maladies, which have made deep inroads during the regimes of previous governments.

The Chief Minister asserted that the previous governments have plundered the public wealth mercilessly. He said that the successive governments in the state have even surpassed Britishers in looting the taxpayers money. However, Bhagwant Mann said that his government will recover every single penny from these corrupt leaders and optimally utilize it for the welfare of people.

The Chief Minister, while listing several path breaking initiatives of his government, said that the Aam Aadmi government is providing corruption free governance to the people adding that pilferages in the public money have been plugged and now that money is being used for the state and its people. He said that his government has passed the historic ‘One MLA, One Pension’ scheme to ensure judicious utilization of public funds. Likewise, Bhagwant Mann said that around 100 Aam Aadmi Clinics have been dedicated across the state to people for imparting quality health services.

The Chief Minister said that till date more than two lakh patients have availed free treatment in these clinics and more than 30,000 blood tests have been conducted so far, that too without any cost, in these clinics. Bhagwant Mann said that apart from ensuring quality health facilities to people, this has also reduced extra burden on big hospitals. Similarly, he said that 600 units of free power are being provided to lakhs of households across the state.

The Chief Minister further said that on one hand the process for new recruitment has been started and on the other wheels have also been set in motion to regularize the jobs of contractual employees. Likewise, he said that the state government will soon embark on a scheme to provide Atta Dal to the beneficiaries at their doorsteps. Bhagwant Mann also said that pensions will also be disbursed to the eligible beneficiaries at their homes.

The Chief Minister further said that the state government is organizing ‘Khedan Watan Punjab Dian’ to promote sports culture in the state. Describing fairs as a tradition of Punjab, Bhagwant Mann said that this legacy must be kept alive to restore the pristine glory of the state. He said that these fairs provide a platform to individuals to get knowledge about the cultures, traditions and talents of the other states.

Paying glowing tributes to Baba Sheikh Farid ji , the Chief Minister described him as one of the greatest spiritual ambassadors, poet prophet and founder of ‘Sufi’ tradition in India. He said that Baba Farid ji’s philosophy of humanism and spirituality based on the principles of love, compassion, equality, humility, brotherhood and freedom reigned supreme and was all pervasive. Bhagwant Mann further said that the life and philosophy of Baba Farid ji was very much relevant in today’s materialistic society.

The Chief Minister also said that the teachings of Baba Farid ji were a source of inspiration for the coming generations to serve humanity with utmost zeal, humility and dedication. Exhorting the people to follow the footsteps of Baba Farid ji, he said that it will help in cementing the ethos of communal harmony, peace and brotherhood in the society. Bhagwant Mann announced that every effort will be made to give a major push to development of Faridkot district.

In her address Cabinet Minister Dr Baljit Kaur also congratulated the people on this auspicious occasion. She also said that the state government led by the Chief Minister is working tirelessly for the well being of people.