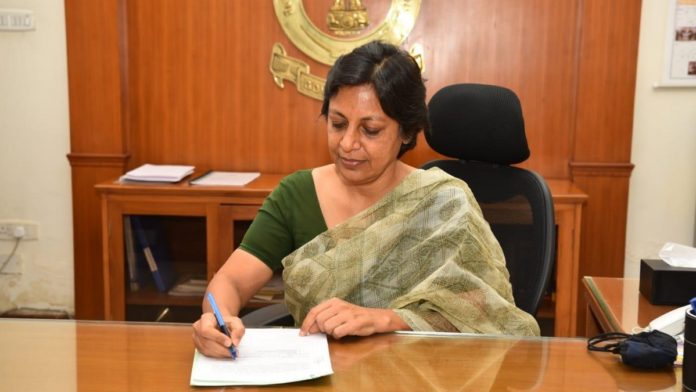 Chandigarh, November 20 : Aiming to facilitate the society facing cyber threats in the digital era, Chief Secretary Vini Mahajan has launched a three month long cyber campaign “Cyber Surakhya” in Punjab on the occasion of Universal Children’s Day being celebrated on 20th November every year. This campaign is jointly organized by state in collaboration with the CyberPeace Foundation (CPF), an award-winning leading civil society organization and think tank of cyber security and policy experts.

While launching the three months long campaign in the presence of DGP Punjab Dinkar Gupta, Chief Secretary Vini Mahajan said according to the latest NCRB data, over 28,000 cyber crimes were committed in 2019. She added that such campaigns are necessary for educating the common public regarding the risks of losing hard earned money from their bank accounts merely on account of lack of digital literacy.

She said that the campaign would provide information to women and children for ways and means to ensure privacy while using online platforms and how to ward off and be protected from online stalkers and avenues to approach law enforcement agencies in times of need. Vini Mahajan congratulated the Punjab Police and the Cyber Peace Foundation for their joint initiative for the welfare of public.

On the occasion, Chief Secretary also released the CBSE publication “Cyber Safety” which has been translated into Punjabi language by the Community Affairs Division of the Punjab Police.

Speaking about the campaign, DGP Dinkar Gupta also shared his concern about the rise in cyber crimes and the requirement of awareness amongst women, children and senior citizens so that they could save themselves from online threats.

DGP further informed that State Cyber Crime Police Station was also looking into important cases of cyber crimes. In addition to this, cyber crime units had also been established in all districts of Punjab who were being imparted training for registering and investigating cyber crime cases, he added.

Dinkar Gupta stated that the three month-long campaign being run by Punjab Police and CPF was designed to promote and bolster the levels of cyber safety awareness amongst netizens, particularly children, women, and senior citizens. In addition, he said this campaign would also focus on all major aspects of online/cyber safety and would leverage digital platforms, webinars, radio campaigns, and a host of other activities targeted at various age groups.

He revealed that this program would also include training modules for the police personnel working towards a cyber safe nation. The campaign would, in particular, focus on issues such as child pornography, stalking and cyber grooming crimes being faced by women and children on a daily basis and causes lot of agony and harassment to the victims.

Sharing more details, DGP added that the campaigns would also be hosted across the social media platforms such as Twitter, Facebook, Instagram and YouTube channel of the Punjab government. Moreover, this campaign would also be aired on the FM stations in an endeavor to reach out to the internal areas of Punjab. Throughout the campaign, new and emerging areas of cyber crime awareness would be imparted amongst the citizens. Indeed, various aspects of new-age cyber frauds such as tele frauds, financial frauds, identity theft crimes (phishing, vishing), malware detection and much more would also be covered during this campaign.

Elaborating further, he said the campaign would also empower citizens in not only identifying cyber threats but also in the prevention of various cyber security incidents before they happen and seek the right redressal in order to mitigate cyber threats. Therefore, the campaign would especially focus on cyber safety for children, women, and parents, along with cyber threats which are being emerged during the Covid-19 pandemic.

Vineet Kumar, founder and president of CyberPeace Foundation also shared his views and briefed the august gathering regarding their earlier partnerships with Andhra Pradesh Police and Assam Police in initiating cyber awareness campaign before partnering with Punjab Police for this campaign in all districts of Punjab.