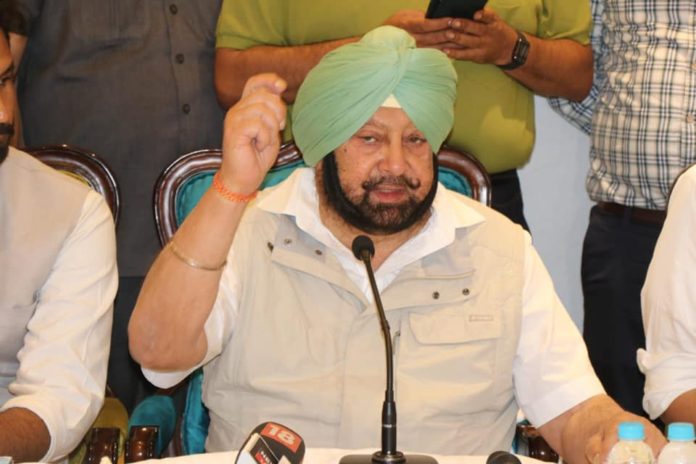 STOP TRYING TO DIVERT PUBLIC ATTENTION FROM YOUR OWN MISDEEDS, SAYS CAPT AMARINDER TO HARSIMRAT

TRASHES HER ALLEGATIONS ON DRUGS AS ATROCIOUS & MISLEADING, AND DESPERATE BID TO SAVE AKALIS FROM PAYING FOR THEIR SINS

Chandigarh, June 4: Trashing Harsimrat Badal’s allegations as atrocious and misleading, Punjab Chief Minister Captain Amarinder Singh on Tuesday said it was the Shiromani Akali Dal (SAD) that was using a grave issue like drugs to divert public attention from their own responsibility in the matter.

Reacting strongly to Harsimrat’s charges that his government had failed to curb drugs meance in the state, the Chief Minister expressed shocked and disgust at Harsimrat’s brazen lies and attempts to cover up the misdeeds of the previous SAD-BJP government with such falsehoods.

Pointing out that this was not the first time he had urged the Prime Minister to come out with a national drugs policy to tackle the menace, the Chief Minister said Harsimrat’s remarks had exposed her total ignorance of the ground realities in the state and her desperation to regain the confidence of Punjab’s people, particularly the youth whose lives the Badal regime had destroyed by allowing the drugs mafia to flourish under their rule.

Not only had his government broken the backbone of the drugs mafia in the state, it had also put majority of the drug smugglers and dealers behind bars, while the remaining few had fled in panic, the Chief Minister pointed. But obsessed as she is with her own personal interests, Harsimrat had never bothered to find out how many drug peddlers have been arrested and how many youth are undergoing treatment in the OOAT clinics set up by his government, Captain Amarinder lashed out.

The Badal’s propensity for spreading disinformation had blinded them to the fact that the people of Punjab, who had suffered under their misrule for 10 years, were no longer willing to be fooled by their lies and fabrications, said the Chief Minister.

“Is she (Harsimrat) so dumb that she does not know that drugs is an inter-state problem, with national repercussions? With poppy cultivation legal in some states and Pakistan also pushing drugs from across the borders, anyone with a little sense would have figured out the importance of collective efforts by all states, spearheaded by the central government, to tackle the menace. But Harsimrat is in the habit of shooting from her mouth, without understanding the meaning or implications of her words,” Captain Amarinder said.

Responding to Harsimrat’s tweet, in which she also said that the Congress MLAs were blaming police-political nexus, the Chief Minister said his party MLAs had also been baying for the blood of the Badals and wanted them to be punished without even a proper investigation in many cases, including sacrilege and drugs. “So I should listen to them and throw you all behind bars,” Captain Amarinder quipped to Harsimrat.

The Congress MLAs, like the other people of the state, had suffered under the Badal rule and were angry for havoc wreaked by the SAD-BJP government on them, and were naturally reacting to the fact that the perpetrators of the various crimes seem to be going scot free, said the Chief Minister, asserting that there was no way he would allow any criminal, howsoever high a position he might have occupied in the erstwhile government, to escape punishment.
“You are all going to pay for your sins,” said the Chief Minister, adding that making such frivolous and baseless allegations would not help save Harsimrat or the rest of the Badal clan from the wrath of the people or from being punished under the law for the crimes committed under their nose, and maybe at their behest.