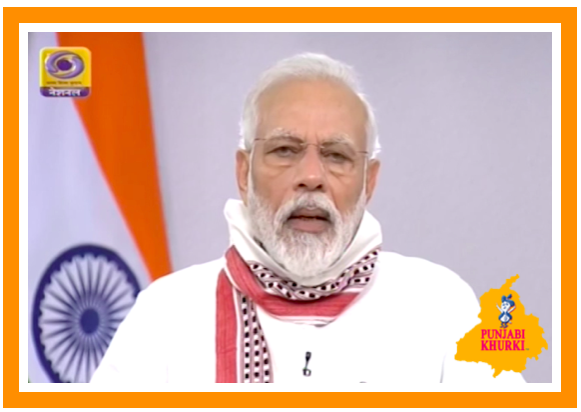 New Delhi, April 26: In the 64th edition of his monthly radio programme ‘Mann Ki Baat’ on Sunday, Prime Minister Narendra Modi hailed India’s fight against coronavirus as “public-driven” and urged people not to lower their guard against the pandemic.

He asked people to shun any complacency that they would not be affected by the virus in case it hadn’t reached the places they lived or worked in.

Lauding state governments for fighting coronavirus in cooperation with the Centre, Modi said all sections of society had stepped in with humanitarianism in helping maintain social distancing and rendering help to people affected by the lockdown as India was in the middle of the fight.

“The police personnel have endeared themselves to the public through their outreach to those in distress and distribution of food,” Modi said, adding that earlier the police evoked negative image among people.

He urged people to be a part of a digital platform — covidwarriors.gov.in — which seeks to bring all crisis management stakeholders at one place. He appreciated the role of community leaders in the campaign against the disease.

He commiserated that the outbreak of the disease continued during the holy month of Ramzaan, compelling caution and social distancing. “This is the time for more intense prayers and spiritualism so that the disease makes itself scarce by the time of upcoming Eid,” Modi said.

He exhorted people to stop spitting in public places. Cautioning people not to be overconfident, he appealed to abide by the dictum — Do gaj ki doori, bahut hai jaroori (physical distance of two yards is very important) — in social manners and interactions.

He said usage of face mask would emerge as a new symbol of a civilised society. He also urged people to follow the guidelines of Union Ministry of AYUSH on food intake and purificatory rituals which would help boost their bio-immune system.

The PM expressed confidence that the world would acknowledge the significance of India’s traditional medicine system of Ayurveda in a similar way it adopted yoga.