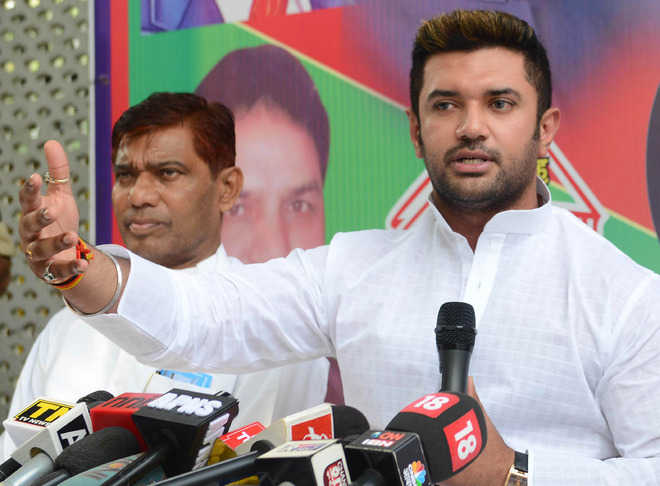 The BJP on Friday slammed LJP president Chirag Paswan, asserting that it is fighting the upcoming elections in Bihar in alliance with the JD-U, the VIP and the HAM(S) and that there is no place in politics for a ‘vote katua’, or a vote-cutter, party like the LJP.

In its most scathing criticism of the LJP, which is contesting the upcoming Bihar elections independent of the NDA (of which it otherwise remains a part in the Centre), the party also advised Chirag to fight on his own strength like “other small parties” led by leaders like Pappu Yadav, Pushpam Priya, Upendra Kushwaha, Asaduddin Owaisi etc and “stop firing from shoulders of the BJP”.

BJP spokesperson Sambit Patra said: “I want to clarify once and for all, we have no B team, C team or D team. We are fighting these elections with the JD-U, the VIP and the HAM(S) against the ‘apavitra gathbandhan’ of the RJD-Congress etc. It is a direct fight between NDA’s ‘pavitra’ (pure) gathbandhan and ‘apavitra (impure) gathbandhan’, the alliance of extremism and corruption.”

Patra said the LJP is fighting for its “existence and well being” but the way it is “spreading lies is sad and condemnable”.

“Let me tell there is no place in politics for a ‘vote katua’ and somehow the LJP has emerged as a party that wants to cut votes,” he said, claiming that the “NDA alliance will win the upcoming three-phase elections with a two-third majority” about which “there should be no confusion or even an iota of doubt in anybody’s mind”.

Chirag, on his part, said he felt “disappointed and sad” at the ‘vote katua’ accusation by the BJP.

“Under pressure of Nitish Kumar, it is said that senior leaders like Bhupender Yadav and Prakash Javadekar are speaking the language of Nitish Kumar. They should remember they are calling Ram Vilas Paswan’s party ‘vote katua’. It is clear that Nitish Kumar is worried,” Chirag said, again asserting compete faith in “his prime minister”.

Chirag has been strategically criticising Nitish Kumar while praising Prime Minister Narendra Modi and supporting the idea of a BJP chief minister in Bihar, earning the title of BJP’s ‘Plan B’ to ‘wipe out Nitish Kumar and the JD-U’.

NDA’s rivals are having a field day who are using Chirag’s utterances against the incumbent CM to their advantage in their campaigns, ringing alarm bells in the NDA camp.

Notably Yadav, while reminding Chirag that he won the Jamui seat in the 2019 Lok Sabha election as a part of the NDA, also recalled how he praised the functioning of the Bihar government till as recently as February 2020.

Questioning what then led to a change in stance in past few months, the senior BJP leader accused the Jamui MP of indulging in “politics of lies” to further his own interests.

In his interviews, Chirag has been accusing the JD-U of working against LJP candidates in the 2019 Lok Sabha election in violation of the “coalition dharma”.

While asserting support for the BJP and the PM, he also claimed that Nitish Kumar behaved in a haughty manner with his father Ram Vilas Paswan, whose death just before the elections has led to a certain sympathy for Chirag.