Bhagwant Mann invites investors from Saskatchewan to invest in Punjab 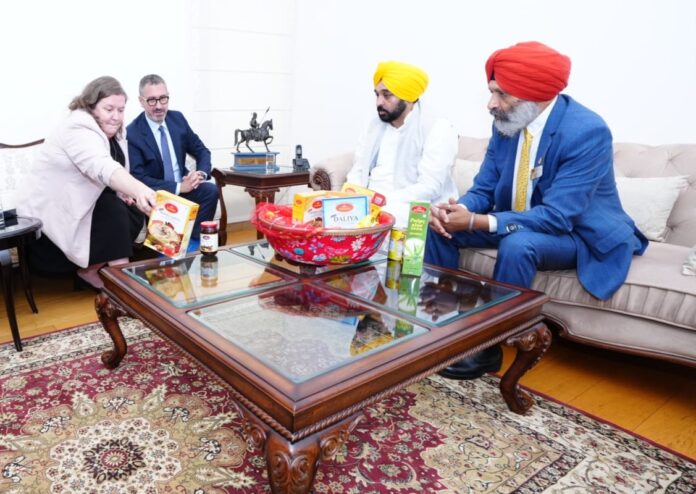 The Chief Minister, during parleys with a high level delegation of Canada province Saskatchewan which called on him at his residence today, advocated strong and cordial ties between Punjab and Canadian province. He said that Punjabis have been playing a vanguard role in the social economic progress of Canada. Likewise, Bhagwant Mann also said that it is a matter of great pride and satisfaction that a large number of Punjabis have also carved a niche for themselves in the political arena of Canada too.

The Chief Minister also showcased Punjab as the most preferred industrial destination across the country. He invited the delegation from Saskatchewan to encourage the entrepreneurs to invest in Punjab which is having favourable atmosphere for industrial growth. Bhagwant Mann said that the state government has already put the state on high growth trajectory of industrial growth which will benefit the investors.

Batting for further streamlining the mechanism to ensure that Punjabis settled in Canada are able to get the branded products of state in a smooth and hassle free manner, the Chief Minister said the renowned products of state like Sohna brand from Punjab are acclaimed world over adding that Punjabi diaspora have special liking for it. Likewise, he said that VERKA products like Ghee, Milk, Butter, Lassi, Kheer, Curd, Ice-Cream, Sweets and others have already created a niche for themselves. Bhagwant Mann solicited support from Canadian delegation to enhance the supply of these goods to Punjabis sitting abroad.

The Chief Minister also said that cooperation between both Punjab and Canada especially province of Saskatchewan can be mutually beneficially for them. He said that this is need of the hour to give fillip to economic activity in Punjab and ensure the comprehensive development of the state. Bhagwant Mann also envisioned that mutual cooperation between both Punjab and Canada will transform the destiny of the youth of state by opening new vistas of employment for them.