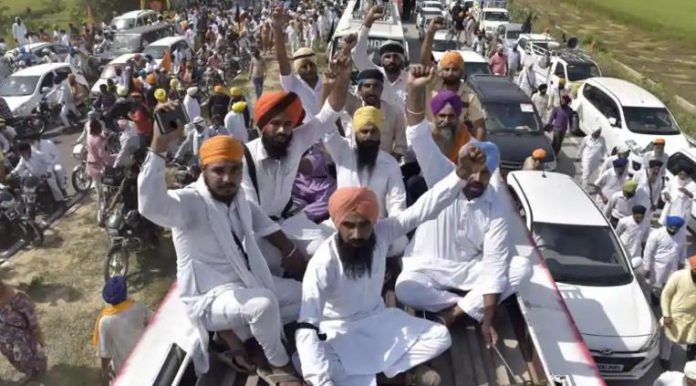 Chandigarh, October 9: The Punjab government is chary of using force to evict the anti-sacrilege protesters staging a sit-in at Bargari since June 1. A top Punjab government functionary on Monday said that there was no plan to act against the protesters as the sit-in has been peaceful and in no way causing inconvenience neither to the people nor to the administration.

On the other hand, the protesters are in no mood to call off the sit-in till former chief minister Parkash Singh Badal and former deputy CM Sukhbir Singh Badal are arrested for their alleged role in the police firing on anti-sacrilege protesters in 2015. “Till then, the protest will continue,” said Dhian Singh Mand, a parallel Jathedar, who is the main face behind the sit-in.

Action against Badals got a renewed push on Sunday when radical Sikh leaders, including Mand, and Aam Aadmi Party (AAP) rebels took out a march from Kotkapura to Bargari in support of the demand. AAP rebel leader Sukhpal Singh Khaira read out a resolution passed in the Bargari rally, giving an 15-day ultimatum to the Capt Amarinder Singh government.

On Monday, a senior government functionary on condition of anonymity said “the law will take its own course”, while refusing to cite a deadline for the sit-in.

Sunday’s Bargari rally was held parallel to those of Congress in Lambi and Shiromani Akali Dal’s in Patiala.

“At the moment, we can’t do much because the Punjab and Haryana High Court has stayed the proceedings initiated against the police officials named in the Justice Ranjit Singh (retd) Commission report,” he said.

The commission set up by the Capt Amarinder Singh government in its report had indicted Badals of their role in the sacrilege and the police firing thereafter. After the report was tabled in the Vidhan Sabha in August, SAD president Sukhbir Singh Badal had said that the panel report nowhere indicted him or his father.

“There is no stay on the arrest of Badals, they could be arrested if the government is serious,” said Mand. AAP leader Sukhpal Khaira also said that the government can arrest them (Badals) if they have the intent to do so.

“We have fulfilled all promises made to those sitting on protest. Justice Ranjit Singh report was tabled and discussed in the Vidhan Sabha and a Special Investigation Team (SIT) has been constituted to investigate the matter. Action will be taken on its findings as mandated by the law,” Punjab’s housing, urban development and panchayats minister Tript Rajinder Singh Bajwa said.

Mand, however, rejected what Bajwa said. “The promises which the government claims had been fulfilled are like water in a closed container that we can see but can’t use it,” he said.

From government’s side, Bajwa is in touch with the protesters. “We have also started steps for the release of 20 Sikhs lodged in different jails of the country,” said Bajwa, adding that the state government acted on this much before the demand from protesters came up.