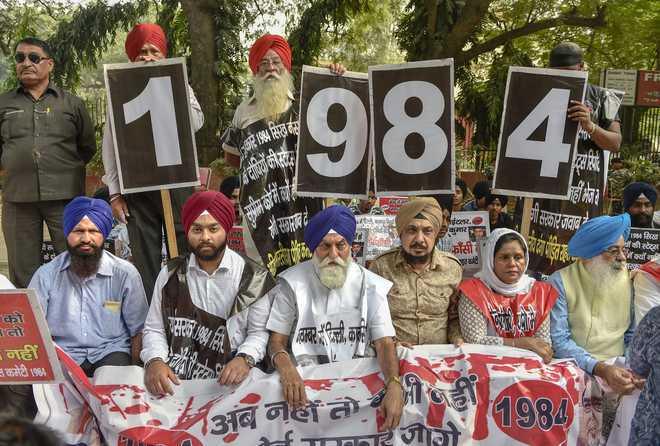 More than six months after Justice Dhingra Committee, probing 186 cases in the 1984 anti-Sikh riots, submitted its report to the Supreme Court, senior BJP leader and “intervenor” RP Singh has written to Home Minister Amit Shah regarding action taken by the Government of India against culprits in the case as “promised”

The government must take action as promised without any further delay on an urgent basis, Singh wrote in his letter to Shah, calling it a “reminder, seeking immediate action to be taken by the Centre, as stated by the Solicitor General on behalf of the MHA before the Supreme Court in January”.

Singh also urged the Centre to form a new SIT to ascertain the “invisible hand” behind this organised massacre.

“It is also prayed keeping in mind that even after more than 30 years of impunity, justice to the Sikh community has not been given,” he said.

According to the BJP national secretary the report submitted by Justice Dhingra Committee “clearly and unarguably put forward a case in favour of the petitioners, displaying explicitly how various functionaries of the state, namely, the Judiciary, the police and the state were working hand in glove not only to aid such a gruesome hate crime against a minority community but also successfully manage to shirk off the accountability for the same by giving clearance to the accused”.

“As the report makes it abundantly clear it is reiterated that the violence, riots as well as the clearance to the persons involved, including but not limited to the rioters, were indeed orchestrated and cleared by an invisible hand from the very top of the government in power during that time. It is submitted that instead of holding those responsible for the violence to account, many police officials and other persons involved have been promoted over the last 30 years,” he said.

Supreme Court in its order dated January 11, 2018, constituted a three-member SIT with the direction “to proceed as regards the further investigation in respect of 186 cases and submit its report within two months”.

The committee was formally notified by the MHA on February 9, 2018.

Two members of the committee joined in February, however, the third member did not join stating personal grounds.

On the intervention of Singh, the Supreme Court on December 4, 2018 changed the constitution of the committee to two-member, which included Justice Dhingra, former Judge of Delhi High Court, and Abhishek Dular, IPS.

The MHA on January 15, 2020, informed the Supreme Court that it accepted the report of the SIT which implicated several Delhi Police personnel in the 1984 anti-Sikh riots and said it would take action accordingly.