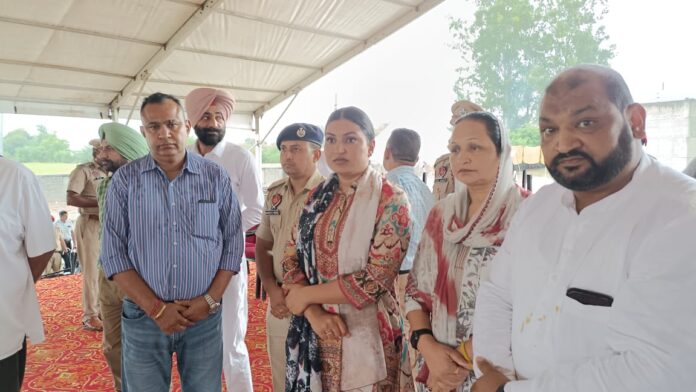 Cabinet Minister Madam Anmol Gagan Mann today took a special review of the preparations for the state level event being organized on September 28 on the occasion of the 115th birth anniversary of Shaheed-e-Azam Sardar Bhagat Singh at Khatkar Kalan. Punjab Tourism, Cultural Affairs, Labour, Investment Promotion and Grievance Redressal Minister Ms Anmol Gagan Mann after paying obeisance to the statue of Shaheed-e-Azam Sardar Bhagat Singh at Khatkar Kalan said that the thought and sacrifice of the heroes who sacrificed their lives for the country to keep them alive, we will always celebrate their birth anniversary and martyrdom anniversary so that the new generation can be aware of the rich history and rich heritage of these heroes of the freedom they got for their country.

She said that our heroes like Shaheed-e-Azam Sardar Bhagat Singh will always live in our thoughts. She said that it is our responsibility to take their thinking and history to our new generation and future generations.

She said that Sardar Bhagat Singh stood and fought for the freedom of the people of the country by disapproving of slavery. Shaheed-e-Azam laughingly kissed the hanging rope and gave priority to dying and sacrificing for the country. His sacrifice for the country will always be remembered.

She said that Chief Minister Bhagwant Maan will come to pay obeisance to Shaheed-e-Azam Sardar Bhagat Singh in the state-level event being organized by the Punjab government on the occasion of his birthday. She said that the state government of Chief Minister S. Bhagwant Mann is committed to create the state of dreams of Shaheed-e-Azam Sardar Bhagat Singh and is taking historic decisions towards giving honest and transparent administration on the path shown by him.

The Minister for Tourism and Cultural Affairs appealed to the people to remember Shaheed-e-Azam by lighting candles in their homes and hoisting the tricolor on the banners on the day of his birth and to take an oath that the freedom he fought for. Sacrifice was given with imagination and the freedom struggle was fought, let us support the Bhagwant Maan government in establishing its vision.