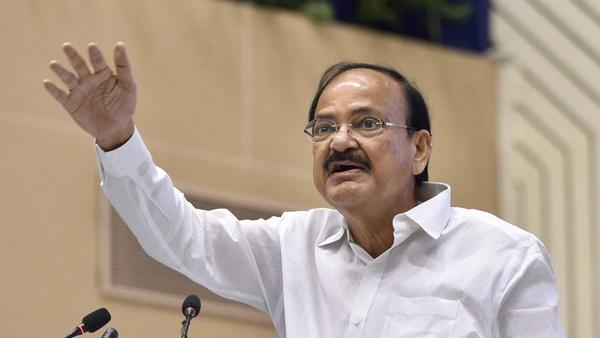 Chandigarh, Sep 22: In ancient India, Durga was the defence minister and Laxmi the finance minister – at least, that’s what India’s vice-president Venkaiah Naidu believes. Delivering the keynote address at the Indian School of Business (ISB) Leadership Summit in Mohali on Friday, Naidu made the reference to the goddesses while advocating the empowerment of women.

Naidu also told students to be proud of their heritage. “Speak in any other language only when the other person does not know your mother tongue,” he said. “Ram Rajya is still hailed as the greatest period of our history because of the ideal governance. But if one talks about it today, it too may be given a communal angle,” he said during his speech peppered with humour, anecdotes and Hindi one-liners.

The vice-president said there was a debate on “growing intolerance” and freedom of speech for some time but that it was wrong to term society as growing more intolerant.

“Some people expressed their views on Afzal Guru….in a democracy we have a right to express our views. But these views have to be within the constitutional framework. There have to be limitations on freedom of speech and expression,” he said.

“We need regulations for democracy to survive. The dignity of an individual is important but it cannot be above the integrity of the country.”

Naidu also said that Indian society was tolerant towards others’ views and diversity was the beauty of the country. “Our Constitution guarantees liberty to practice one’s religion and right to equality irrespective of caste, creed and religion…secularism is strong in India not because of Constitution but because it is in the DNA of Indians and the society cannot be branded as growing intolerant,” he added.

Recounting achievements of the NDA government such as smart cities and the Jan Dhan scheme, he said “he has retired from politics, but not tired”. Union minister of state for civil aviation, Jayant Sinha, Hero Corporate Service Private Limited chairman Sunil Kant Munjal and Punjab health minister Brahm Mohindra – he represented Punjab CM Captain Amarinder Singh who was in Gurdaspur for filing of nomination papers of state party Congress chief Sunil Jakhar for Lok Sabha by poll were also present.