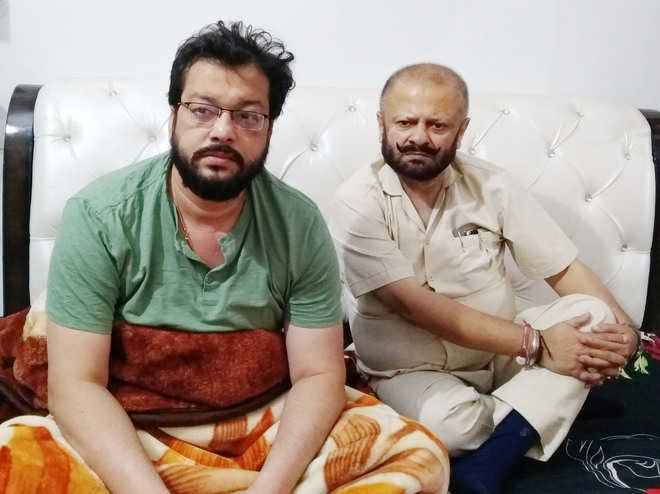 Amritsar, May 20: A private hospital owner, Dr Munish Sharma, was kidnapped by Gopi Ghanshampuria and other gangsters late Thursday evening when he was returning home in the Ranjit Avenue here from Ajnala.

Ghanshampuria is an accomplice of gangster Vicky Gounder, who had escaped from the Nabha jail last year. Dr Sharma, who runs a hospital at Ajnala, was released by the gangsters after his family paid a ransom of Rs 7.5 lakh. The gangsters asked him to hand over Rs 60 lakh more by Monday and threatened to kill him and his family in case he failed to give the same.

ADGP (Law and Order), Rohit Chaudhary, along with the Police Commissioner, visited his house. He assured the family of full security and support. He also assured that the accused would be in the police net soon as they were working on certain leads.Fear was writ large on the face of Dr Munish Sharma who had injury marks on his face. He was brutally thrashed by the gangsters in the custody.

While talking to The Tribune, Dr Sharma said he left the hospital at around 7.30 pm and went to a nearby shrine to pay obeisance. He said while returning home, when he reached near Bhala Pind, a car coming from behind signalled him with dippers.

“I thought they were seeking a passage and therefore I slowed down and moved my vehicle to the side. However, the car driver started honking. Then I thought that they may be some known persons and I stopped my XUV,” he said.

“Three persons came out of the car. One of them had bandage on his head. They asked me to write a prescription for a scan of the injured,” he said. He said when he was examining him, they pulled him out of the XUV and pussed him to the rear seat of his vehicle at gunpoint.

He said they started thrashing him and took him to a secluded place near Loharka. They demanded Rs 2 crore as ransom. He said when he expressed his inability to give such a huge amount, they again started beating him. They asked him to call his wife and one of accused, identified as Supreet Harry, went to his house in his XUV to take the money. He was released by them at around 12 midnight.

He said the accused had two bags, one containing pistols and other a huge quantity of ammunition. “I thought the gangsters would not leave him alive even after taking the ransom amount,” he said.When he returned home, his relatives informed the police, following which senior police officials reached his residence to investigate.

Rohit Chaudhary said, “The Punjab Police is very serious about the problem of gangsters and appropriate measures are being taken to nail them. The police have prepared the records of gangsters which have been circulated to all police stations so that they could be arrested soon.