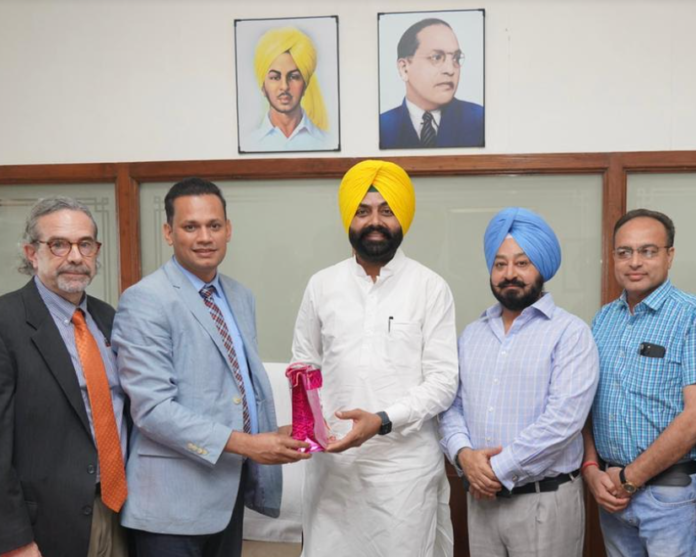 CHANDIGARH: Gauging the immense potential in agri-subsidiary sectors in the state of Punjab, the delegation of the Oklahoma State University of United States of America, on Thursday, called on the Animal Husbandry, Fisheries & Dairy Development Minister Laljit Singh Bhullar for providing and developing latest services and technology.

During the meeting here at Cabinet Minister’s office at Punjab Civil Secretariat, the two members delegation, which has been visiting India from August 7 to 12, apprised Cabinet Minister Laljit Singh Bhullar that the university is keen to develop latest vaccine and technology in animal husbandry sector.

Dr. Jerry R. Malayer, Senior Associate Dean for Research and Graduate Education Professor and McCasland Chair of University College of Veterinary Medicine and Ashish Ranjan, Professor and Endowed Chair Director of Interact Institute apprised that there is immense potential in Punjab in the sector of agri-subsidiary sector. Therefore, the University wants to help the state in developing new vaccine and latest technology for the prevention of animal and zoonotic diseases. Apart from this, the university will design training programs for veterinary officers of the state about livestock treatment, surgery, diagnostic center, surveillance, data collection besides conducting students exchange programs.

Cabinet Minister said, Chief Minister Bhagwant Singh Mann government is committed for raising farmers’ income by increasing profits in agri-subsidiary sector such as animal husbandry etc., which are an integral part of the agriculture sector.

“We will consider every aspect abundant with the possibilities of progress resulting in increasing the income of farmers and livestock farmers”, said the Minister, assuring that he would discuss proposal of the Oklahoma State University with the Chief Minister and new horizons will be established in subsidiary sector of the agriculture.

The delegation has been visiting India from August 7 to 12 and approached the state of Punjab for providing and developing latest services and technology after meeting with the Government of Delhi.