Washington, February 7: India’s Ambassador-Designate to the United States Taranjit Singh Sandhu on Thursday presented his credentials to President Donald Trump in his Oval Office of the White House.

Trump, during the Oval Office credentials ceremony, warmly welcomed Sandhu, a career foreign service official, back to Washington DC and wished him success in his responsibilities as India’s ambassador to the US. 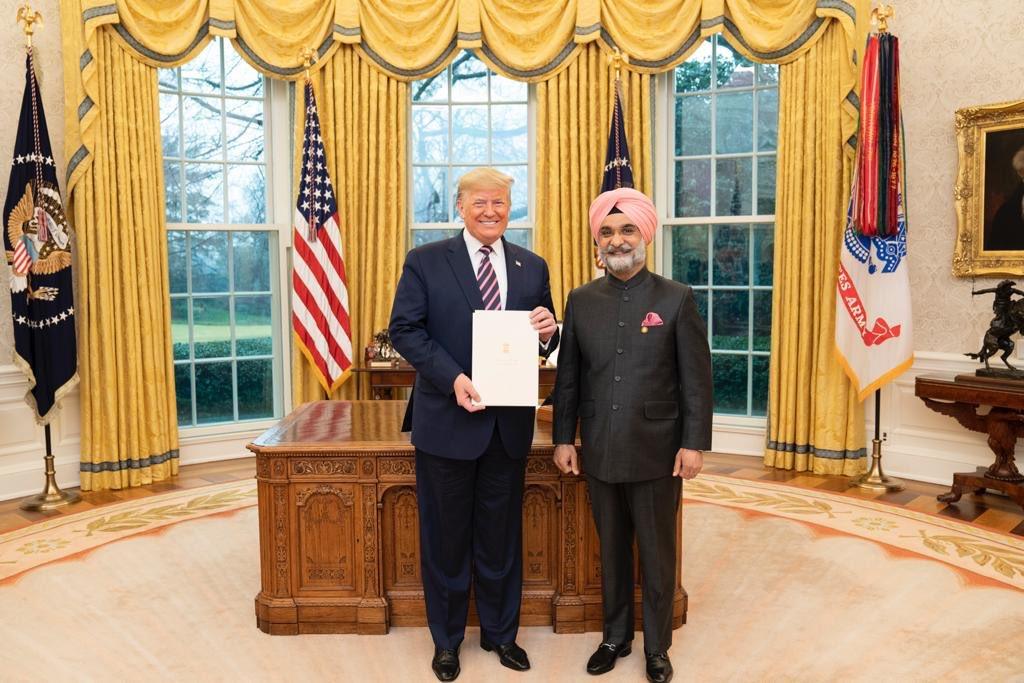 “The President fondly recalled his friendship with Prime Minister Narendra Modi and their several interactions,” the Indian Embassy said in a statement.

Sandhu conveyed warm greetings from the President and the Prime Minister of India to Trump and the First Lady, the statement said.

Sandhu also added that the vision and guidance provided by Prime Minister Modi and President Trump in the last three years had moved India and the United States towards greater strategic convergence.

The Indian Ambassador affirmed his commitment to work towards strengthening strategic partnership between India and the US, which is anchored in mutual trust and friendship, democratic values and people-to-people ties, the media statement said.

“Extending my warmest welcome to @SandhuTaranjitS, India’s new Ambassador to the US. A strong champion of #USIndia ties, Amb Sandhu’s proven record & deep experience augurs well for the future of our partnership. Welcome back to Washington! AGW,” Acting Assistant Secretary of State for South and Central Asia Alice G Wells tweeted.

One of the most experienced Indian diplomats on US affairs, Sandhu was Deputy Chief of Mission here from July 2013 to January 2017.

Earlier, he was First Secretary (Political) at the Embassy of India, Washington DC, responsible for liaison with the United States Congress from 1997 to 2000. He has also been at the Permanent Mission of India to United Nations, New York from July 2005 to February 2009.

Born on January 23, 1963 in a family of educationists, Sandhu studied at The Lawrence School, Sanawar, and graduated from St Stephens’ College, Delhi, with History Honours. He pursued a Master’s degree in International Relations at the Jawaharlal Nehru University, New Delhi.

Sandhu is married to Reenat Sandhu, who is Ambassador of India to Italy.

In a distinguished career spanning over 30 years in the Indian Foreign Service since 1988, Sandhu started his diplomatic career from former Soviet Union (Russia) where he worked as Third Secretary (Political)/Second Secretary (Commercial) in the Indian Mission from 1990 to 1992.