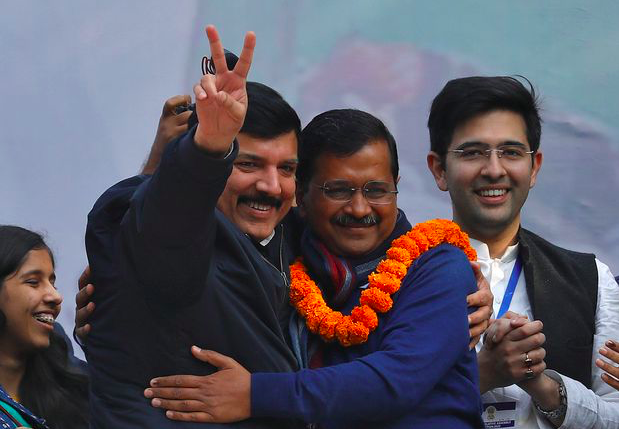 New Delhi, February 11: Arvind Kejriwal led the Aam Aadmi Party to a stupendous victory yet again in the Delhi Assembly polls, dealing a body blow to the main rival BJP and completely decimating the Congress in a keenly-watched battle in the midst of anti-CAA protests.

The 51-year-old bureaucrat-turned-politician almost replicated the AAP’s fairy-tale victory of 2015 by riding on his government’s development agenda, and in the process emerged as a key leader in the national political landscape.

According to the final figures released by the Election Commission, the AAP won in 62 of the 70 seats with a total vote share of 53.57 per cent. The BJP emerged victorious in the remaining eight seats, getting 38.51 per cent of the total votes. The Congress could not even manage a single seat and ended with 4.26 per cent vote share.

The AAP’s stupendous victory comes nearly eight months after it suffered a severe drubbing in the Lok Sabha polls in which the party drew a blank while the BJP won all the seven seats. 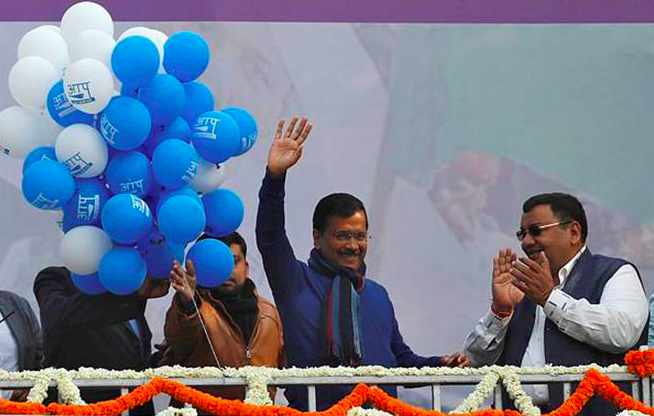 The victory also assumes significance as it came in the face of BJP’s no holds barred attack against protesters opposing the Citizenship (Amendement) Act as “supporters of Pakistan” during the bitterly-fought campaign.

“Dilliwalon, ghazab kar diya aapne (Delhiites, you have done the impossible). I love you,” Kejriwal, flanked by his wife, daughter and senior party leaders, said in a brief thank you address at the party’s headquarters here.Later, he visited the famous Hanuman temple near Connaught Place along with his family and Deputy Chief Minister Manish Sisodia.All AAP heavyweights including Sisodia, Raghav Chaddha and Atishi, Gopal Rai, Satyendar Jain emerged victorious.

“Congratulations to AAP and shri Arvind Kejriwal ji for the victory in the Delhi assembly elections. Wishing them the very best in fulfilling the aspirations of the people of Delhi,” the prime minister tweeted.

Opposition leaders hailed AAP’s landslide win as a defeat of the politics of polarisation and hate and a victory of inclusive politics, saying “winds of change” are blowing in the country.

Leaders of non-BJP parties cutting across party lines said the poll outcome showed that elections can be fought and won on the development plank. There was also a call for all regional parties to come together to keep the BJP out of power.

West Bengal Chief Minister Mamata Banerjee, who was among the first to congratulate Kejrwial, said the Delhi polls have proven that only development will work.

“I have congratulated Arvind Kejriwal. People have rejected BJP. Only development will work, CAA, NRC and NPR will be rejected.” the TMC supremo told reporters in Kolkata, amid the protests against the CAA, National Register of Citizens (NRC) and National Population Register (NPR).

NCP supremo Sharad Pawar utilised the AAP’s sweeping win to stress that regional parties need to come together to keep the BJP out of power.

“The Delhi poll results indicate that ‘winds of change’ are blowing in the country. The results are not surprising to me,” Pawar told reporters in Pune.

“The BJP, as usual, played the communal card to polarise votes, but failed,” he said. The elections in the national capital took place in the midst of massive protests in the city and elsewhere over the new citizenship law, an issue which was strongly raised by the BJP top leadership during the campaigning which often turned bitter and vitriolic.

Though BJP’s campaign focused on national security issues, the AAP mainly focused on its achievements in the fields of education, healthcare and infrastructure.T

he AAP had registered a sensational victory in 2015 by winning 67 seats in a hurricane march that almost wiped out the BJP and the Congress.

“We have been saying since the beginning that the upcoming polls will be fought on the basis of work done by us,” AAP spokesperson Sanjay Singh told reporters.

A clear majority shows that doing Hindu-Muslim politics will not work anymore, said AAP volunteer Fareen Khan at the party office.After he was declared winner from the Patparganj seat, Sisodia said the BJP indulged in “politics of hate”, but people refused its agenda.

“The BJP indulged in politics of hate, but I thank the people of Patparganj…Delhi’s people have chosen a government which works for them and explained the true meaning of nationalism through their mandate,” he told reporters.

Carrying blue and white balloons, buntings and giant cut-outs of their leader Arvind Kejriwal, AAP workers celebrated at the party’s headquarters in the national capital.Grooving to the tunes of the party’s campaign song – ‘Lage Raho Kejriwal’ – and drumbeats, AAP workers and supporters hugged each other and offered ‘ladoos’ amid a charged atmosphere.

The Congress accepted defeat and vowed to rebuild and revive itself at the grassroots level in the city.“People’s mandate is against us, we accept it. We have resolved to revive and rebuild the party,” Congress’ chief spokesperson Randeep Surjewala said at a press conference.

A total of 672 candidates, including 593 men and 79 women, were in the fray for the hotly contested elections.