Chandigarh, October 31: Over 56,000 atta-dal scheme beneficiaries have been found to fake by the Capt Amarinder Singh government, during a verification drive by the Food and Civil Supplies Department for weeding out “undeserving” persons allegedly enrolled by the previous government. 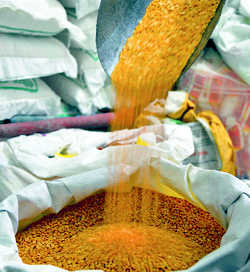 Bathinda is found to have the maximum fake beneficiaries (21,260). Of 2,23,466 beneficiaries in the district, 2.02 lakh were found genuine. As much as 90.5 per cent of the verification in Bathinda is over. Only 71 per cent of verification in Muktsar, home district of former CM Parkash Singh Badal, is complete and here, 47,514 beneficiaries are found fake.
The drive, launched after the new government took over in March, was carried out across 22 districts in the state.

Though this detection of fake or undeserving beneficiaries is based on the checking of 84.5 per cent of the beneficiaries, officials say they expect to complete the entire verification process by the end of the month. The CMhad set a deadline of October 10 to complete the process.

Information gathered by The Tribune reveals that of the 36,312,70 beneficiaries who were getting subsidised atta-dal under the National Food Security Act, the department found that 30,668,67 beneficiaries were genuine.

Besides atta and dal, the new government has also promised to provide sugar and tea leaves to all these beneficiaries, and raised the budget for this scheme to Rs 500 crore. But the government first wanted to weed out fake beneficiaries as it suspected that the Akali-BJP government had favoured many “undeserving” persons to reap political benefits.