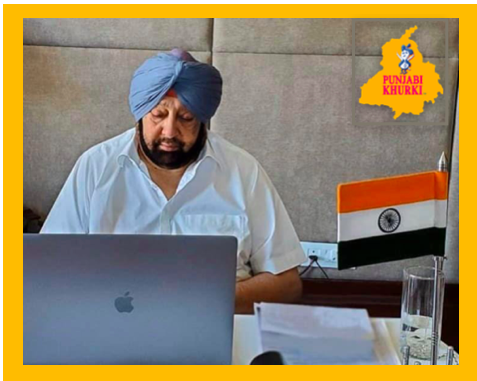 Chandigarh, May 18: Directing the local administration and the police to maintain high alert in the wake of lifting of restrictions, Punjab Chief Minister Captain Amarinder Singh on Monday directed the Transport Department to draft SOPs for resumption of local bus movement in all but the containment zones, but ruled out inter-state bus service till May 31.

Terming the danger of spread as a result of mixing of people with the start of the relaxations as the real test, the Chief Minister directed all departments to ensure close monitoring and strict adherence to all advisories.

He asked the Police Department to be tough in ensuring social distancing and other necessary Covid prevention protocols and to challan those stepping out without masks.

At a Video Conference to review the Covid and lockdown situation in the state, the Chief Minister instructed the Transport Department to put in place stringent protocols for handling daily passengers travelling on the point-to-point inter-state buses which will start moving after May 31.

While making it clear that inter-state movement will be allowed only on special and Shramik trains, at least till May 31, the Chief Minister said buses will be allowed to ply within the state in a phased manner. A list of SOPs, including daily disinfection of the buses, will be issued before the resumption of the bus service in the non-containment zones, he added.

ACS Home Satish Chandra said in line with the Centre acceding the state’s request to do away with colour coding, the state will now have only Containment and Non-Containment Zones.

As per the Health Department guidelines, an area around the epicentre of 15 or more cases in a village/ward, or a small group of adjacent villages/wards, will be treated as a containment zone, with physical parameters to clearly define the same, in terms of access and size.

Concentric area around the containment zone (radius up to 1 km) will be treated as a buffer zone. In all these zones,  the Department will carry out intensive and continuous house-to-house surveillance and contact tracing, with special focus on vulnerable and high risk populations.

Containment period would be minimum of 14 days, to be extended by one week at a time if more than one new case comes up in this period.

Referring to the continued entry of migrants, NRIs and others via special trains and flights, the Chief Minister reiterated his earlier directions for strict adherence to their quarantine rules. So far, 60000 Punjabis had registered for return to the state, he said, adding that 20000 NRIs were also expected to return.

The Chief Minister said while Punjab was willingly sending back people, including migrants, from other states, spending Rs 7.5 lakh per train, other states were not responding in like and were asking his government to arrange for ferrying Punjabis back from there.

As of date, more than 2 lakh migrants of the 11 lakh who had registered on the special portal created by the government had left Punjab, the Chief Minister disclosed. As many as 20 trains are leaving Punjab every day, with 15 scheduled for UP and 6 for Bihar on Monday.

Captain Amarinder said while more trains were needed for Bihar, the state was not willing to take in people at this stage as their quarantine facilities were full.

On being informed that the state was receiving requests from migrant labour from other states like UP and Bihar to return to Punjab to work in the fields during the Paddy season, the Chief Minister directed the Chief Secretary to work out the modalities for the same with the Centre. All such workers shall have to be quarantined in the villages they would be working in, he said.

Punjab Food & Civil Supplies Minister Bharat Bhushan Ashu said his department was collating data of migrants based on registrations made for travel, in line with the Government of India’s directions on distribution of rations.

All those coming in are required to upload a clean health chit on the COVA app, with checking being done at the borders on arrival, Chief Secretary Karan Avtar Singh said.

Dr KK Talwar said analysis showed that only 1% of the migrants leaving Punjab were turning out to be positive, which was much lower than the figure of those coming back. The rate of increase in cases and doubling in Punjab stands at 1% and 70 days, as compared with the national average, he said, adding that a review of the 35 deaths  (11 male, 24 female) showed that there was only one case with no comorbidity, while 16 had a single comorbidity and the remaining had multiple comorbid conditions, such as hypertension, diabetes, lung infection, obesity etc..

On the issue of testing, the meeting was informed that in a week’s time, the state would be able to scale up the number from the current 1400 in government labs to 4650 per day in just the three government medical colleges.

In the next 25 days, four more labs in the state would be ready for testing, with additional 1000 per day capacity. This would be in addition to the central government and private testing capacities.

High risk travelers exposed to multiple contacts such as truck drivers, bus drivers, conductors etc. will also be tested in the days ahead.

On the issue of shortage of doctors, the Chief Secretary informed the meeting that DCs were hiring doctors on contract at the local level for the Covid Care Centres.

Medical colleges and private hospitals are joining hands to facilitate tertiary care and treatment as the state gets ready for the next phase of the pandemic.