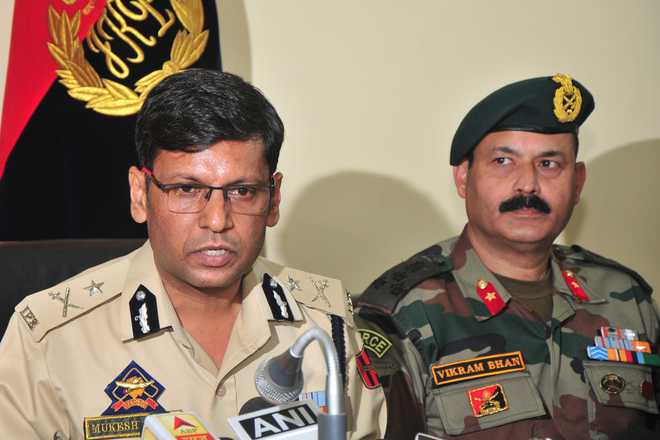 Jammu, September 23: Police claimed on Monday that four cases of terrorism, including the killings of a BJP leader and an RSS functionary in Jammu and Kashmir’s Kishtwar district, had been solved with the arrest of three militants affiliated to the Hizbul Mujahideen.

Nissar Ahmad Sheikh, one of the conspirators, along with Nishad Ahmad and Azad Hussain, all residents of Kishtwar, were arrested for their involvement in the four cases that took place between November to September, Inspector General of Police, Jammu zone, Mukesh Singh said.

Efforts are on to arrest other active militants of the outfit, who hatched the conspiracy in 2017-18 to revive militancy in the Chenab valley, the IGP, who was flanked by Commander Nine Sector Army Brigadier Vikram Bhan and other senior officers, told reporters here.

He said two hideouts set up in the house of Sheikh and Hussain, which were used before and after each of the terror act, were raided during the investigation, leading to seizure of some pistols, a rifle and some kinds of ammunition.

The IGP said: “I would like to send a message that anyone harbouring, sympathizing, transporting or helping terrorists in any form will be dealt with very strictly under the provisions of Unlawful Activities (Prevention) Act”.

The hilly district, which was declared terrorism-free over a decade ago, has witnessed a number of terror strikes and weapon snatching incidents over the past 10 months.

Most recently, on September 13, terrorists struck the house of Peoples Democratic Party (PDP) district president Sheikh Nasir Hussain at Gourian village in the town and escaped with his PSO’s service rifle.